The New Bern Chapter recognized Joanne Owen, a member of the Richard Dobbs Spaight Chapter – Daughters of the American Revolution, with the awarding of the SAR Bronze 250th Anniversary of the American Revolution Medal for her active planning, execution and participation in the anniversary observances of America’s 1st Provincial Congress – The North Carolina Provincial Congress that occurred in New Bern during 25-27 August 1774. Joanne was a representative from the Richard Dobbs Spaight Chapter on the Joint “Partnership in Patriotism” New Bern Resolves Committee from 2019 through the 2022 and played an important role in making the observances a success. The 250th Anniversary of the American Revolution medal is designed to encourage and recognize those SAR compatriots and other patriotic societal members to participate in local, state, national and international events that publicly educate, recognize, honor, and celebrate the heroes of the American Revolution. The medal covers the celebration of any event’s 250th anniversary where the event relates directly to acts of resistance to British attempts to coerce the residents in America: from the first Parliamentary Acts protested after the conclusion of the French and Indian Wars through the armed struggle of the American War for Independence ato the ratification of the Treaty of Paris by the Continental Congress. This covers any public celebrations in the period from 2014 to 2033. Shown presenting the award to Joanne Owen is Bob Ainsley, President, New Bern Chapter and Sims Wayt (who pinned on the award), Regent, Richard Dobbs Spaight Chapter. 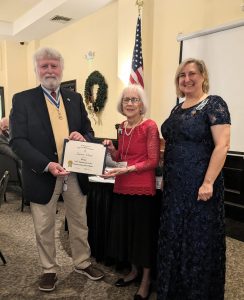