Members of the Blue Ridge Chapter Color Guard were honored to present our nation’s “Colors” at a recent Naturalization Ceremony held in Asheville, North Carolina on September 23rd. The event was held in the Court of Chief Judge Martin Reidinger, who gave a very poignant message to all in attendance. It was the first Naturalization Ceremony since the onset of the Covid pandemic in 2020. Thirteen new citizens from various other countries such as Turkey, Ukraine, Canada, Mexico, El Salvador, and Taiwan swore their oaths to the United States of America.

As the Session opened, the Color Guard paraded the Colors before those assembled and stood at attention during the Star-Spangles-Banner. Following the administration Oath of Citizenship, the Guard again presented the Colors during the Pledge of Allegiance and the singing of God Bless America.

At the closing of the Court, the Color Guard paraded the Colors to the center of the courtroom to allow our newest citizens to pose for pictures. Several of the new citizens (and family members), as well as Court Officers, made their way to the center of the chambers to be photographed with descendants of America’s Patriot heroes. 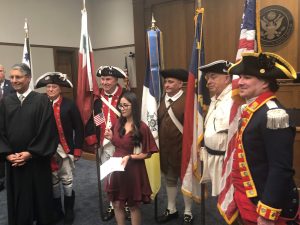 The Color Guard consisted of Lance Dickinson, Craig Issacson, Garry Linton, and Tom Rightmyer. Bette Dickinson filled in for another Color Guard member who was unable to attend.

Listed below is the Oath of Citizenship