There is nothing like an “old Fashioned” 4th of July parade to bring out a community’s celebrants in force. This year’s celebration in Hendersonville, North Carolina, was among the best, and the Blue Ridge Chapter Color Guard and Compatriots were on hand to remind those in attendance that our forefathers invested heavily in our freedoms.

Members of the Color Guard were on the lead float in the parade. Along with a mixture of Continental and militia uniforms worn by CG members, a variety of historic flags were seen waving in the fresh morning breeze. Among those on display from the float were the Betsy Ross, Bedford, Guilford Court House, and Continental flags from the American Revolution. 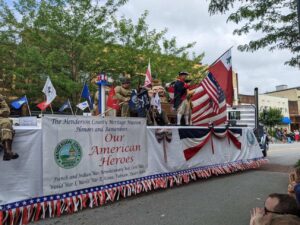 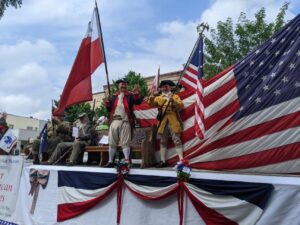 Other Compatriots were on hand at the Historic Henderson County Court House. In the American Revolution gallery area of the museum, long-time SAR member Tom Long assisted in orienting visitors while Compatriot Dan Jordan handed out over 50 copies of the United States Constitution.

During the past several years, the Blue Ridge Chapter has become one of the main features of the July 4th parade and other affiliated events in the region.