250th Anniversary of the American Revolution Recognition Program: This recognition program is designed to encourage and recognize those compatriots, chapters and societies that participate in local, state, national and international events which publicly educate and recognize, honor and celebrate the events and heroes of the period surrounding the American Revolution. Participation involves the planning and execution of these events, as well attendance. SAR Members may be awarded the Medals of achieving the following levels which must be certified by his chapter, state, district or national society. (1) Bronze Medal: 25 promotion points. (2) Silver Medal: 60 promotion points. (3) Gold Medal 150 promotion points. Non-SAR members may also be awarded these medals.

Martha Washington Medal: Is presented to a woman over 18 years of age in recognition of outstanding service to the SAR.

Lydia Darragh Medal: This medal is named after Lydia Darragh (1729-1789), who crossed British lines in 1777 during the British occupation of Philadelphia, Pennsylvania to deliver information to George Washington.  As did Lydia Darragh, many ladies have had to courageously adapt to various circumstances in an effort to work side by side with Presidents General and State Society President and Chapter Presidents. This medal will recognize the assistance of the ladies who work behind the scenes supporting SAR programs. It may only be presented once per year at the discretion of the President General, a Vice President General, State Society President or Chapter President. To the lady who has provided significant service to our Chapter President, Craig Issacson shall this medal go.

Chapter Roger Sherman Medal: This medal is named after Roger Sherman (1721-1793), who was a founding father, and the only person to sign all four Congressional papers of the United States: The Continental Association, the Declaration of Independence, the Articles of Confederation and the Constitution. The Bronze Roger Sherman Medal may be awarded to a compatriot in recognition of, and in appreciation of, outstanding services rendered to a Chapter. The recipient must have served as an active officer for a minimum of two years, as an active committee chairman for three for years, or as an active member of a committee for four years. 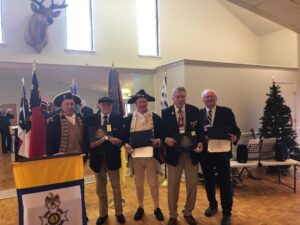 Chapter Meritorious Service Award: Is awarded to a SAR member who has rendered long, faithful and meritorious service to their chapter.

Chapter Medal of Distinguished Service: Is awarded to a Compatriot in recognition for that Compatriot’s conspicuous service to the chapter during the Chapter President’s administration. 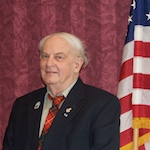 Fire Safety Commendation Medal: The Fire Safety Commendation Medal is awarded to an individual for accomplishments and/or outstanding contributions in an area of fire safety and service. This award is not limited to firefighters. It may be awarded to recognize a variety of fire safety and service that has evolved into a highly technical and skilled profession with constant study, development and involvement by numerous dedicated citizens with a single goal: to protect human life and property by preventing injuries or casualties due to fire and chemicals.

Law Enforcement Commendation Medal: The Law Enforcement Commendation Medal is awarded to those who have served with distinction and devotion in the field of law enforcement. This medal is intended to recognize exceptional service or accomplishment in the field of law enforcement. Eligibility is not limited to peace officers, it also extends to the entire range of persons who make and enforce the law to include attorneys, judges, prosecutors and legislators.

It is easy to see that the Blue Ridge Chapter is an active, energetic & busy chapter that is always looking for new members to help us reach our challenging goals for the recognition of the sacrifices our Patriots made for us.