On 17 September, the NCSAR New Bern Chapter Color Guard had the honor of participating in a very special ceremony at the VFW Post 2514 in New Bern..  After Japan attacked Pearl Harbor on 7 December, 1941, Pvt. Charles E. Cook of New Bern, enlisted in the Army and was assigned to the 60th Coast Artillery at Corregidor.  The 60th Coast Artillery would see significant action defending Corregidor, and on 3 May, 1942, Pvt. Cook would be KIA.  Unfortunately, his remains were never recovered.  However, his “Dog Tags” were found, and during this special ceremony, they were returned to his niece, Mrs. Marian Cook Haddock.  It was a true honor for the New Bern Color Guard to be part of this event, which helped to bring some sense of closure for the family. 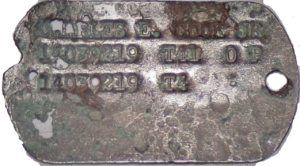