On 7 May, NCSAR President, Jay DeLoach, presented National SAR Robert E. Burt Scout Volunteer Awards to two New Bern Chapter members, Ed Stinson and Roger Helmick.  Ed Perkins was a third Chapter member to receive the award, but he was presented his Award during a separate event.  Also in attendance for the award presentations on the 7th of May, were the New Bern Chapter Color Guard, Sims Wayt (Regent of the Richard Dobbs Spaight Chapter of the Daughters of the American Revolution), other New Bern Chapter members and other friends and family members. 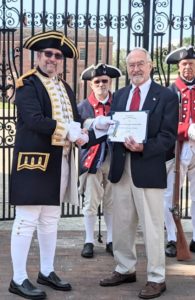 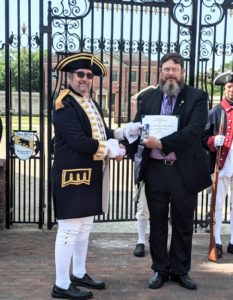