During the Halifax County Board of Commissioners meeting on October 21st, 2019, Halifax Resolves Chapter NC SAR member Ken Wilson presented the Sons of the American Revolution Life Saving Medal to a Halifax County Sheriff’s Deputy and a member of the Davie Volunteer Fire Department.

The citation read as follows:

“At approximately 1:20 A.M. on Monday, August 12th, 2019 patrol deputies of the Halifax County Sheriff’s Office and members of the Davie Volunteer Fire Department received a call in reference to a suspected house fire in the area of West 10th Street in Roanoke Rapids. Corporal Jacob J. Pignanello and members of the Fire Department responded to the area and were able to locate the residence which was engulfed with flames. Upon Corporal Pignanello’s arrival, he spoke with two residents that had already escaped the home and learned that there was another female still asleep inside the burning residence. Proceeding to the back of the residence, Corporal Pignanello and DVFD Lt. Michael Manning located the window of the bedroom where the female resident was sleeping. Corporal Pignanello was able see inside the burning home and witnessed the female choking on smoke and appeared to be disoriented.  As Lt. Manning penetrated the thick hedge under the window, Corporal Pignanello found a bicycle tire pump in the yard of the burning residence and threw it through the window.  This allowed the victim to exit thru the window to safety assisted by Lt. Manning. The victim received medical treatment on scene, and was transported to a local area hospital to seek further treatment for smoke inhalation. Without a doubt, the actions of Corporal Pignanello and Lt. Manning saved this resident’s life.” 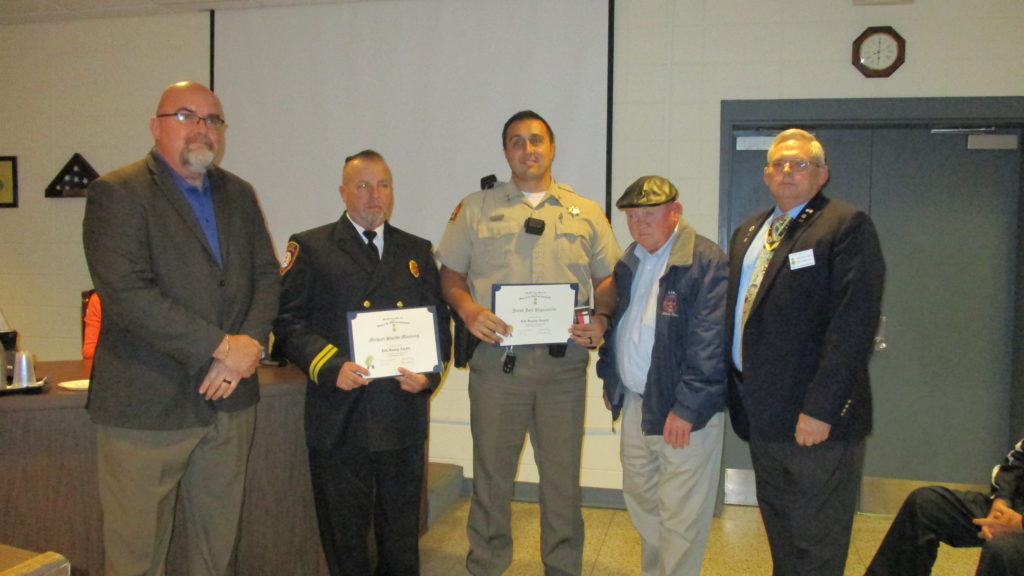