Over the years that Chapter 886, of the Vietnam Veteran of America, has been visiting the NC Veterans Home in Kinston, Chapter members, and their families, have had the pleasure of meeting and getting to know many great men and women who reside there. However, one man stood out to all, Mr Isaac Pope. During WWII, Isaac Pope was a 1st Sergeant in the 969th Field Artillery Battalion, Battery D and helped lead the first black unit allowed in battle during the war. His unit won a Presidential Citation for Meritorious Service at the Battle of the Bulge. Beyond that however, Isaac Pope was a gentleman, who was loved, and respected by all.
Mr Pope passed away earlier this year, shortly after he turned 100 years old. To honor Mr Isaac Pope, and all he stood for, during their Veterans Day ceremony, VVA Chapter 886 presented a Memorial Plaque to the NC Veterans Home. Gary Gillette, the VVA’s Chapter President, and also Registrar of the New Bern SAR Chapter, had the honor of presenting the plaque.  Mr Pope’s niece was present during the ceremony to help accept the Plaque. The Plaque will go on display at the Home, to ensure that Mr Isaac Pope, like all Veterans, will not be forgotten. 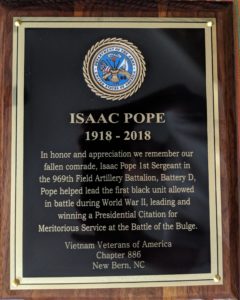