The Halifax Resolves Chapter NC SAR joined with the Social Studies Department and the AJROTC Jacket Battalion of Roanoke Rapids High School in conducting a Flag Retirement ceremony for the school’s students. Students in the Social Studies classes wrote and conducted the ceremony.  This was the third such ceremony held in the last twelve months.

The students were welcomed by Halifax Resolves Chapter President Ken Wilson and Social Studies Teacher Mr. Seth Warren. The Invocation and Benediction were given by HRC Chaplain Rev. Duncan Jones.  Colors were posted and retrieved by the Jacket Battalion Color Guard.  The Pledge of Allegiance was led by Erica Whitmore.  CW3 (ret) Mark Stith (USA) of the Jacket Battalion spoke on what the flag meant to him. “I Am Old Glory” was read by Cameron Rogerson.  Matthew Norton presented “A Toast to the Flag”. “Colors of the Flag” was read by Elizabeth Lavizarri.  Tony Mason assisted Burn Master Ken Wilson with “The Preparation of the Flame”. “Taps” were played by Luke Riggan.  Roanoke Rapids Fire Department Station No. 1 oversaw the ceremony.  Approximately 130 students attended the event.  A total of 51 flags were retired and the ashes buried in an unmarked grave by the Burn Master. 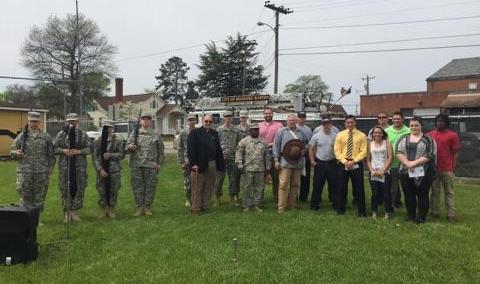