WOW!  What a start for the New Year.  Americanism, Stark, Reconciliation, Board of Managers Reports all due at about the same time.  It does not get any more difficult than this month has been and yet we are still moving forward.

While the dust was still flying, I managed to visit le Marquis de Lafayette to assist with the induction of new officers including new president, Compatriot Michael Aycock as well as present the Silver Color Guard Medal to Compatriot John Elliot.

I also inducted three new members into the SAR and through the recommendation of President General J. Michael Tomme to have a state and chapter mentoring program, I was able to charge their mentors, Compatriots Bob Ervin and David Mann during the induction ceremony to ensure the new members had someone to guide them through their SAR journey.  The meeting was also serenaded by the Barbershop quartet, Par Four featuring former State President Frank Horton as the bass. 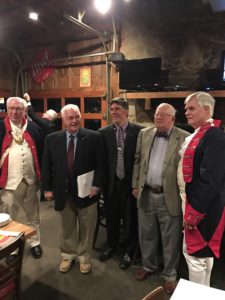 The second weekend of January, Lower Cape Fear Chapter president, Gene Funderburk travelled from Wilmington to Spartanburg, SC to attend the South Atlantic District meeting led by VPG Dr. Larry Fehrenbacher, Sr.  I was able to report good news from the state of North Carolina as we progressed through the fall and my report is available on line at:  http://www.soatlanticdist.info/assets/VPG_Report_-_Gary_Green_NC.pdf

That evening, we visit the Spartanburg Public Library to listen to a speaker portray Bloody Banastre Tarlton, leader of the Loyalist Legion who fought against the Patriots under General Daniel Morgan.  It was a different take of the activities during the American Revolution from the viewpoint of MP Banastre Tarlton as he wrote his memoirs in about 1809.

The next day we travelled to the Cowpens and joined with other members of the North Carolina, South Carolina, Virginia, Georgia, Florida, Tennessee, and Ohio SAR members plus many DAR and CAR representatives.  Over 90 wreaths were on display as each chapter and society rendered honors to those who fought in January 1781.

We travelled from the main visitor’s center down to the Captain William Washington Monument where PG Tomme and the Park Superintendent John Slaughter joined with a young visitor, Landen, to render honors to Captain Washington.

The following weekend I participated in my chapter monthly meeting where we discussed the upcoming visit with PG Tomme and his First Lady, Cilla, who will be our guest speakers at our annual George Washington birthday celebration.

PG Tomme and Cilla will arrive Friday night after spending Thursday evening with the Mecklenburg Chapter as the chapter hosts Abraham Lincoln.  On Saturday, 25 Feb, PG Tomme will be the special guest of the Moore’s Creek Battleground Association as they present their Annual Celebration of the Battle of Widow Moore’s Bridge in February 1776.

Julie and I travelled to Duluth (Atlanta), Georgia to participate in the awards banquet of the Georgia Society during their annual meeting.  Each of the South Atlantic District state presidents attended and it was a very practiced event; the men from Georgia can do it well.  Early the next morning, we headed to Hopewell Presbyterian Church in Huntersville to participate in the commemoration of Cowan’s Ford.  Our guest speaker was playwrite, Bob Inman, who has presented “Liberty Mountain” at the King’s Mountain community theater for the last three years.  Make an effort to see this year’s rendition.  Watch for notice of an SAR/DAR night in late June.  Following the presentation in the church, Secretary General Larry Guzy, Kings Moutain president, Brian Smith, Kings Mountain immediate past president, Doyle Campbell and I inducted Compatriot Bob Inman into the SAR.  He was not expecting the induction.

Following the dedication of a new monument remembering the men who fought at Cowan’s Ford over forty-five SAR/DAR/CAR organizations were recognized for rendering honors to the participants and casualties at the Battle of Cowan’s Ford.

Lunch was convened at the Hickory Tavern in north Charlotte and the Board of Managers commenced soon after the buffet lunch was prepared.  Representatives from 23 of the 27 chapters held a highly productive meeting.  Among the actions taken by the Board was a decision to support President General’s Youth Awards Initiative with a $1,000 check donation to be presented at the Leadership Meeting in Louisville at the beginning of March.  A petition to form a new (Alexander Lillington) chapter in the Duplin County area was approved by the Board.  The Board also approved presenting changes to the bylaws to the members at the Annual Meeting in Greenville, NC on 21-22 April.  All North Carolina society members should attend this meeting. The registration form for the meeting will be on our society web page in the very near future.

Immediate Past President Tim Berly is developing the proposed officers and committee members for the 2017-2018 North Carolina SAR leadership.  If you get a call from Tim to serve, please do not ignore the call; we NEED your service.  If you are not currently serving and are interested in supporting the NC SAR, please offer your service.

The Education Committee chair, David Gammon is leading the North Carolina SAR in its annual support of the North Carolina Social Studies Conference in the Koury Center in Greensboro on 2-3 Mar 17.  He has asked for volunteers to assist in manning the booth.  Assistance is needed during three time slots, 8-12 and 12-4:30 on Thursday and 8-12 on Friday.  If you can assist, please contact me or Compatriot Gammon   From David:  “We really only need two or maybe three at any given time.
I will be there all day Thursday, March 2.  So I would need one or two men that morning, and one or two men that afternoon.  That way we would always have two or three at the booth.  The booth should be open from about 8:00 to 4:30 that day… We also need two men for Friday morning.”

Please review details for other coming events on our state calendar.  http://ncssar.org/events/

Our annual meeting will be held at the Holiday Inn in Greenville, NC starting with a President’s Reception on Friday night, 21 April.  We will conclude with our banquet on Saturday evening with our guest speaker, Janet Uhlar who has written multiple books focusing on the American Revolution.  One of her biographical fiction books, “Freedom’s Cost” focuses on Major General Nathanael Greene who valiantly fought with Lord Cornwallis at the Battle of Guilford Courthouse.