Our activities in October were numerous. The first was a meeting of the South Atlantic District in Spartanburg, SC on 6 Oct. There was a candidates’ forum and the District supported all unopposed candidates for national office, Bruce Pickett for Registrar General and Mark Anthony for Historian General. The following day was spent at King’s Mountain during the first rain bands of Hurricane Matthew; we all got soaked during the DAR dedication of a monument for two free men of color and one slave who fought at the battle of King’s Mountain. Following that ceremony we recognized the other patriots who fought during the battle. There was a capacity crowd huddled under a large tent provided by our National Park Service.

The following day many compatriots travelled to Shallowford to remember the battle fought there on 14 Oct 1780. Compatriot Fred Learned coordinated the event with participants from the Yadkin Valley and Bethabara chapters providing logistical support. We were joined by two first time SAR color guard Yadkin Valley members Taylor and Lauren Osborne plus members of the Mecklenburg, Nathanael Greene and Alamance chapters.

Color Guard at Shallowford led by Western Adjutant Jim Tatum I drove back to Wilmington from the event into the teeth of Hurricane Matthew and took eight hours to travel the normally four-hour trek. We, in Wilmington, survived the storm with very minimal damage; others were less fortunate.

The Outer Banks and many of the eastern cities of North Carolina were ravaged including Goldsboro, Kinston, Greenville and Lumberton. After concerns that I would be unable to travel were allayed by Outer Banks Chapter President Larry Ashton, I started my review of chapter meetings by travelling to the Outer Banks and assisted Northeast District 1 Vice President in the installation of officers for the chapter. The evening also included a memorial reminiscence of long time chapter president, Richard Baer, who passed away earlier in the week. New chapter president, Larry Ashton, pledged to carry on the yeoman efforts of Compatriot Baer. Installation of Compatriots Bob Justiss, Brownie Douglas and Larry Ashton.

That weekend I participated in the Lower Cape Fear Chapter’s annual Yorktown Victory dinner with a guest speaker, Jim McKee, who is the Site Manager for at Old Brunswick Town one of the first major port cities on the Cape Fear River. Jim regaled us with historical stories of events during the Revolutionary period in the Lower Cape Fear. The following week my wife and I travelled to the mountains to visit the Col Alexander Erwin Chapter during a chapter meeting. President Wayne Davis welcomed both Jim Cook, Blue Ridge Chapter President, Mountain District VP Bill McEntire and me. We heard the story of the Battle of Ramsour’s Mill told by a Ramseur family member with numerous anectdotes that made the story a personal event. Julie and I stayed at the historic Green Park Inn in Blowing Rock and the following day we took a road trip along the Blue Ridge Parkway from Blowing Rock to Asheville during our anniversary, we hit some key “leaf peeking” moments plus some blustery winds in the mountains.

Across the state on Saturday, 22 Oct 16, there were six different patriot graves that were marked by the Gen George Washington, the Battle of Kings Mountain and the Blue Ridge Chapters. I participated in the event near Brevard which was hosted by the Blue Ridge Chapter. We were joined by several descendants of the patriots and Compatriot Jim Cook was busy recruiting new SAR members. Although I did not travel completely from Manteo to Murphy, I think I saw Murphy from on top of the mountain near Brevard.

Following that event, I travelled to Elkin, NC to celebrate the life of Compatriot Ellis Hamby, a former state historian and secretary and a linchpin of the Yadkin Valley chapter. The viewing was scheduled for an hour before the service. Due to the large turnout of friends and acquaintances including Piedmont District VP, Fred Learned and almost the entire Yadkin Valley chapter of the SAR, the service was delayed about 45 minutes. Chapter President Danny Crouse led the SAR chapter members as honorary pall bearers; President Crouse spoke at the grave side on behalf of the SAR.

On 27 Oct, I travelled to Fayetteville to present a program called, “Get a Hobby—Genealogy” to the PrimeTimers at Snyder Memorial Baptist Church. Compatriot Bob Ervin, the president of le Marquis de Lafayette chapter joined me in his home church to observe the 25 members of the group prepare themselves for the start of a new hobby.

The following day, Julie and I were on grandparent duty with our granddaughter, Adalyn, as we joined our state web master, Corey Green, in remembering his birthday in Morrisville, NC. 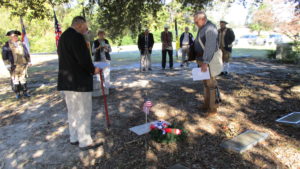 In the near future, Immediate Past President Tim Berly will be developing the proposed officers and committee members for the 2017-2018 North Carolina SAR leadership.  If you are not currently serving and are interested in supporting the NC SAR, please offer your service.  tberly@carolina.rr.com
If you get a call from Tim to serve, please do not ignore the call; we NEED your service.

If you are a veteran and not recognized on this list, please let me know.

In December, the SAR coordinates with the national program “Wreaths Across America” to honor veterans in cemeteries across the nation.  Our society is again supporting the program by donating wreaths to be presented for $15 each.  This is a great time to honor your patriot(s) by purchasing a wreath his/their honor.  This year I will be a speaker at the Wilmington National Cemetery representing the North Carolina Society SAR. If you are willing to participate, please go to this site and DONATE a wreath in honor of your patriot.  https://wreaths.fastport.com/donateLocation.html?page=20408

The Education Committee chair, David Gammon is leading the North Carolina SAR in its annual support of the North Carolina Social Studies Conference in the Koury Center in Raleigh on 2-3 Mar 17.  He has asked for volunteers to assist in manning the booth.  Assistance is needed during three time slots, 8-12 and 12-4:30 on Thursday and 8-12 on Friday.  If you can assist, please contact me or Compatriot Gammon thepinnacle@ec.rr.com  From David:  “We really only need two or maybe three at any given time.
I will be there all day Thursday, March 2.  So I would need one or two men that morning, and one or two men that afternoon.  That way we would always have two or three at the booth.  The booth should be open from about 8:00 to 4:30 that day… We also need two men for Friday morning.”

Please review the coming events on our state calendar for many grave markings and District meetings in the Northeast and Mountain Districts.  http://ncssar.org/events/