Jack Bowman, president, and Ted Kinker, member, Catawba Valley Chapter SAR, along with Jim Tatum of the Mecklenburg Chapter SAR, joined the women of the Jacob Forney Chapter DAR in Lincolnton for a Vietnam Veterans Salute on March 29.

Tuesday was Vietnam Veterans Day, part of a multi-year, national campaign to commemorate the 50th anniversary of the Vietnam War. To celebrate the servicemen and remember the 58,000 who lost their lives, the Daughters of the American Revolution hosted a ceremony on the east side of the Lincoln County Courthouse. 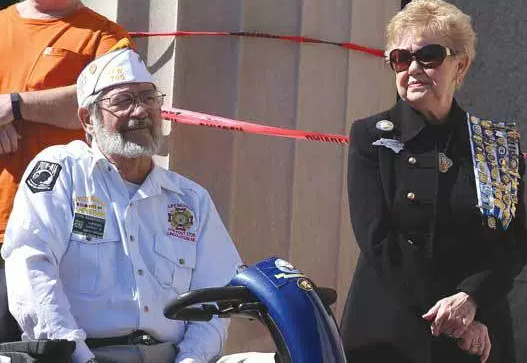 Event organizer Linda Hoyle, of the Jacob Forney Chapter of the DAR, paid tribute to veterans and one mother who lost her child in the war. The crowd joined together in pledging allegiance to the American flag and singing the national anthem. Before closing with a prayer, Hoyle read a proclamation honoring the soldiers.