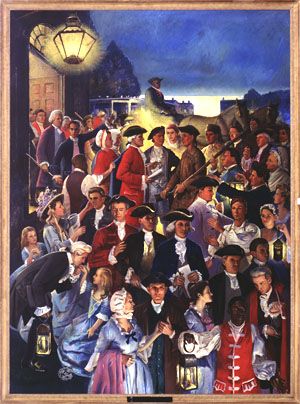 This mural, by artist Francis Vandeveer Kughler, depicts the delegates to the Fourth Provincial Congress at Halifax leaving the Halifax courthouse at nightfall on April 12, 1776, after they had voted “to concur in independency” by adopting the Halifax Resolves. Among those in the scene are Samuel Johnson, Thomas Burke, and Cornelius Harnett.

What were the Halifax Resolves?

The Halifax Resolves were the first official act by any of the thirteen colonies calling for independence from Great Britain. The state of North Carolina, on April 12, 1776, authorized her delegates to the Continental Congress to vote for independence. The 83 delegates present in Halifax at the Fourth Provincial Congress unanimously adopted the Halifax Resolves, which read as follows:

The Select Committee taking into Consideration the usurpations and violences attempted and committed by the King and Parliament of Britain against America, and the further Measures to be taken for frustrating the same, and for the better defence of this province reported as follows, to wit,

It appears to your Committee that pursuant to the Plan concerted by the British Ministry for subjugating America, the King and Parliament of Great Britain have usurped a Power over the Persons and Properties of the People unlimited and uncontrouled and disregarding their humble Petitions for Peace, Liberty and safety, have made divers Legislative Acts, denouncing War Famine and every Species of Calamity daily employed in destroying the People and committing
the most horrid devastations on the Country. That Governors in different Colonies have declared Protection to Slaves who should imbrue their Hands in the Blood of their Masters. That the Ships belonging to America are declared prizes of War and many of them have been violently seized and confiscated in consequence of which multitudes of the people have been destroyed or from easy Circumstances reduced to the most Lamentable distress.

And whereas the moderation hitherto manifested by the United Colonies and their sincere desire to be reconciled to the mother Country on Constitutional Principles, have procured no mitigation of the aforesaid Wrongs and usurpations and no hopes remain of obtaining redress by those Means alone which have been hitherto tried, Your Committee are of Opinion that the house should enter into the following Resolve, to wit

Why were the Halifax Resolves important?

The Halifax Resolves were important not only because they were the first official action calling for independence, but also because they were not unilateral recommendations. They were instead recommendations directed to all the colonies and their delegates assembled at the Continental Congress in Philadelphia. Virginia followed with her own recommendations soon after the adoption of the Halifax Resolution, and eventually on July 4, the final draft of the Declaration of Independence was signed. William Hooper, Joseph Hewes, and John Penn were the delegates from North Carolina who signed the Declaration of Independence. (from “The North Carolina Encyclopedia”)