My last month as President of the North Carolina SAR started off well when Julie and I travelled back to our USAF stomping grounds in Yorktown, VA on April 3 to participate in the Grand Opening of the Jamestown and American Revolution Settlement Museum at Yorktown.  With the help of Compatriots Dan Hopping and Jeff Lambert both leaders in the Sons of the Revolution, we were able to man a table for the SAR at the Museum during North Carolina Day.  The celebration started off with a guided tour of the museum followed by a ceremony celebrating the North Carolina ratification of the Constitution in 1789 as the twelfth state in the union. 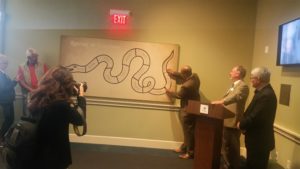 Following the inside activity we progressed to an amphitheater beside the museum which included a mock-up of a fort complete with the firing of cannons led by Compatriot Chris Grimes of the Albemarle Chapter. 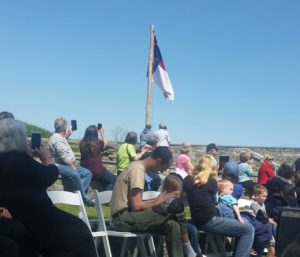 My next activity was explaining the journey of the development of the Patriot Isaac Carter chapter to the Battle of Rockfish Chapter, DAR in Rose Hill, NC.  I ended by explaining that our next step was to add descendants of the community of Free Men of Color near Carvers Creek in Bladen County, NC to the DAR and SAR.  Chapter member, Cindy Ezzell, asked me to make sure her brother received our picture in the next President’s Piece.  Cindy’s portion of the program was to discuss some Indian lore and she explained the restoration of a plains Native American on horseback statue that is on public display in Wisconsin. 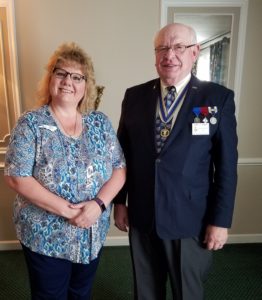 The next step on our trail was travelling with three other members of the Lower Cape Fear Chapter, Bob Williamson, Gene Funderburk and Charles Lewis as we traced the trail that Cornelius Harnett would have travelled from Wilmington to Halifax, NC to participate in the 4th Provincial Congress in preparation of the Halifax Resolves.  This year the significances of the celebration included the attendance of Secretary General Larry Guzy and his wife Karin plus Genealogist General John Sinks and South Atlantic District Vice President Larry Fehrenbaker.  This also was the final event for North Carolina CAR president, Mary Lee Howell.

For the first time in a number of years, the remembrance was celebrated on 12 April along with the many other events in the town of Halifax.  The SAR members retreated to the United Methodist Church fellowship hall for camaraderie and good food in preparation for our return home.

The Annual Convention at Greenville was a solid success.  Thanks to the outstanding preparation by the Gen George Washington chapter, everyone felt like they were participating in a first class event.  We had about 59 participants including South Atlantic District Immediate Past Vice President. Dr. Ed Rigel, Sr and his bride Joan.  After a busy day of officer training, celebration of youth contest winners and a productive business meeting, we concluded with our Saturday night banquet guest speaker, the author Janet Uhlar, describing the life of Major General Nathanael Greene.  I added that my 4th great grandfather, Benjamite Greene, was Nathanael’s commanding officer in the Coventry Company of the Kentish Guard in Rhode Island.  (Bragging rights are important!)  We concluded with awards and change officers conducted by Dr. Rigel.  SMSgt George K. Strunk, USAF (Ret) is now our Society President. 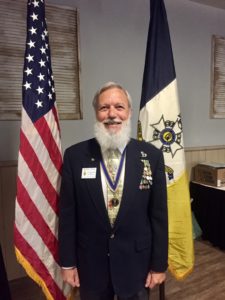 I would like to thank everyone for their good wishes and will conclude with my reflection of our year together in the North Carolina Society.

Overall, I consider my year as president of the North Carolina SAR as a success.  My primary goal was to ensure the NC SAR continued with practices that we do well:

We continue to do these activities well but we will need to invigorate more members to participate.

I feel that the first goal met with some major bumps as we dropped 120 members from our rolls.  Most of our losses occurred in our biggest chapters; I am concerned that with our larger chapters we do not have the good relationships necessary to form a bond that comes with having a common interest in family history and connection to our ancestor patriots.  We can overcome this with PG J. Michael Tomme’s promotion of a chapter Mentor Program.  His initial effort was to ensure new members had a fellow member of the chapter who was invested with the new member’s involvement in the SAR.  It appears that we need to also spread this to our other members.  If your chapter has a mentor program, perhaps there should also be a connection made with current members who have not recently attended a chapter meeting.  The smaller chapters do that all the time to continue as a vibrant chapter.

The second goal was communication.  I think this goal was successfully completed.  I feel that the “President’s Piece” has kept many of the NC SAR compatriots aware of what was happening in the Old North State; however, it was limited to those who had volunteered their correct e-mail address to me and the national SAR.  There were about 240 NC SAR members who do not have e-mail.  I counted on chapter leaders to ensure that information was forwarded to those without e-mail.  The second part of the communication was use of our state web page.  Webmaster Corey Green and I have worked to make the general part of the page less specific so that it does not go out of date each year.  However, only a couple of chapters are using the event/news portion of the page; we can do better. We need to continue with an emphasis upon communication.

The third goal, Veterans Recognition, was a resounding success.   We started the year with recognition of 31 NC SAR members in the various Veterans Recognition Corps at the national SAR.  At this time we have over 90 current SAR members identified as Veterans of Military Service.  We also increased our reporting of our activities with Veterans using the USS Stark Memorial Award.  This was significant in that I believe the NC SAR will be recognized at the National Congress in Knoxville as the winner of the 2017 award.

Although I am pleased with the outcome of our year, I am concerned that we have a dearth of individual SAR members who are willing to step into leadership roles at the state society level.  About a decade ago, we had too many who were willing to step up and lead our society.  At that time we had a two-year time in office for the state president.  Therefore, it was decided that we needed to reduce our time in office to one year and that practice worked well.  However, with our current condition, it may be necessary to revisit consecutive terms in office for our state leaders.

Finally, I thank everyone for the gracious interaction as I visited chapter and district meetings, plus national and state events.  I felt a commitment from everyone that we were doing things right in the North Carolina SAR; we need to continue this positive attitude and look forward to continued success in promoting the SAR goals.

Announcements
Please review details for other coming events on our state calendar.  http://ncssar.org/events/

Duplin County and the Duplin County Historical Society are honoring our men who died in World War I.  We will hold a ceremony to unveil and dedicate a granite monument on the Court House grounds, in Kenansville, at 2:00 P.M., on Friday, May 26, 2017.  There will be reserved parking and seating for handicapped.  Telephone me at 910-296-1111 to arrange.  Duplin County Historical Society web site address is:  www.duplinhistory.org
GARY O. GREEN, President
North Carolina Society SAR