Our Albemarle chapter was chartered in October 2007, and we are actively seeking qualified new members. We usually meet on the third Thursday of the month at 6:30 p.m.at the Nothin’ Fancy Restaurant, 701 North Broad St., Edenton, NC 27932. Interested people are cordially invited to attend (an RSVP is requested). If you would like to join the Albemarle chapter, please contact our chapter president, Chris Grimes, at chrisgrimes@embarqmail.com.  Feel free to contact any of the officers listed on our “Officers” section if you have any questions or would like more information. Download Our Chapter Bylaws 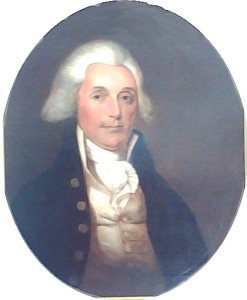 Samuel Johnston was born in Dundee, Scotland in 1733 and settled in NC in 1736. In 1754 he moved to Chowan Co. and established his home, Hayes Plantation, there. An early supporter of independence, he served on the Colonial Assembly’s Committee of Correspondence beginning in 1773 and was elected to the first four Provincial Congresses, presiding over the third in 1775 (Hillsborough) and the fourth in 1776 (Halifax),
the latter of which produced the Halifax Resolves, the first official call for independence from any of the thirteen colonies.

He also served as the Colonial Treasurer, District Paymaster of Troops (1775), State Senator (1779, 1783 & 1784) and a Delegate from NC to the Continental Congresses of 1780 and 1781. He was elected the first “President of the United States in Congress Assembled” on July 10, 1781, under the Articles of Confederation, but declined the office due to health and financial reasons. After the Revolution, he served as Governor of NC from 1787-1789 and presided over the 1788 and 1789 State Constitutional Conventions. He was an active and respected Freemason, as well, serving as Grand Master of Masons in North Carolina (the first) 1787-1788 and 1789-1792. He died on August 17, 1816 and was buried at his home, Hayes Plantation.

The Albemarle Chapter sponsored a commemoration of the life and accomplishments of Samuel Johnston at his gravesite on Sat., December 13, 2008.