The Battle of Ramsour’s Mill took place on June 20, 1780, in present-day Lincolnton, North Carolina. The one to two-hour battle during the foggy morning of June 20th did not involve any regular army forces from either side and was literally fought between family, friends, and neighbors. When they ran out of ammunition, they used their muskets as clubs. Although the Loyalists outnumbered the militia by three to one, the militia decided not to wait for the reinforcements from General Rutherford. So, at daybreak on June 20th, from a hill about one mile from the Loyalist camp, they attacked and won.

Among the at least 120 Compatriots attending the annual reenactment of this 242- year-old National Event was Garry Linton, Color Guard Commander from the NCSSAR Blue Ridge Chapter and John Boyd, NCSSAR Western Vice President who presented one of the wreaths. 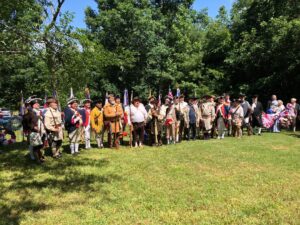 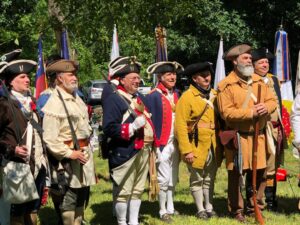