The Halifax Resolves Chapter, North Carolina Sons of the American Revolution hosted a grave marking ceremony at Oakwood Cemetery in Louisburg, NC to honor five members of the now defunct Harrison Macon SAR Chapter that was chartered in 1928 and ceased operations around 1960, though there are no records to substantiate that date. The honorees of the event were: Dr. Daniel Turner Smithwick, DDS; his son, Macon Glen Smithwick; his grandson, Daniel Wayne Smithwick; Colonel Donald Vann Holliday, USA (ret.) and Dr. Hodge Albert Newell, MD.

Halifax Resolves Chapter member Ken Wilson was the Master of Ceremonies for this gathering and welcomed all who were participating in and observing the event. The Invocation was given by Mr. Mark Anthony of the Georgia Society SAR.  The Colors were then presented by the Combined NC SAR Color Guard with the Pledge of Allegiance being led by Mr. William H. Riggan, III.  NC SAR Color Guard Commander SMSgt. George K. Strunk, USAF, (ret.) led the SAR Chorus and all assembled in the National Anthem.

A brief biography of Dr. Smithwick, his son and grandson was presented by Dr, Samuel C. Powell.  Both Dr. Smithwick and Dr. Powell had served as National trustee for the NC SAR and as Vice President-General for the SAR South Atlantic District that is comprised of North and South Carolina, Georgia and Florida. Brief biographies of Colonel Donald Vann Holliday and Dr. Hodge Albert Newell, MD was presented by Mr. William H. Riggan, III outlining each of those compatriot’s contributions to the nation, state and local community.

Compatriot Wilson and Compatriot Steve Avent, Halifax Resolves Acting Chaplain, then dedicated the markers.  This was followed by a musket volley provided by Compatriot William Schwetke of the Virginia Society, SAR.

The SAR Recessional was led by Mr. Renny Taylor and the Colors were retired by the Combined NC SAR Color Guard.  The Benediction was given by Mr. Mark Anthony of the Georgia SAR.  Compatriot Wilson then dismissed the assembly. 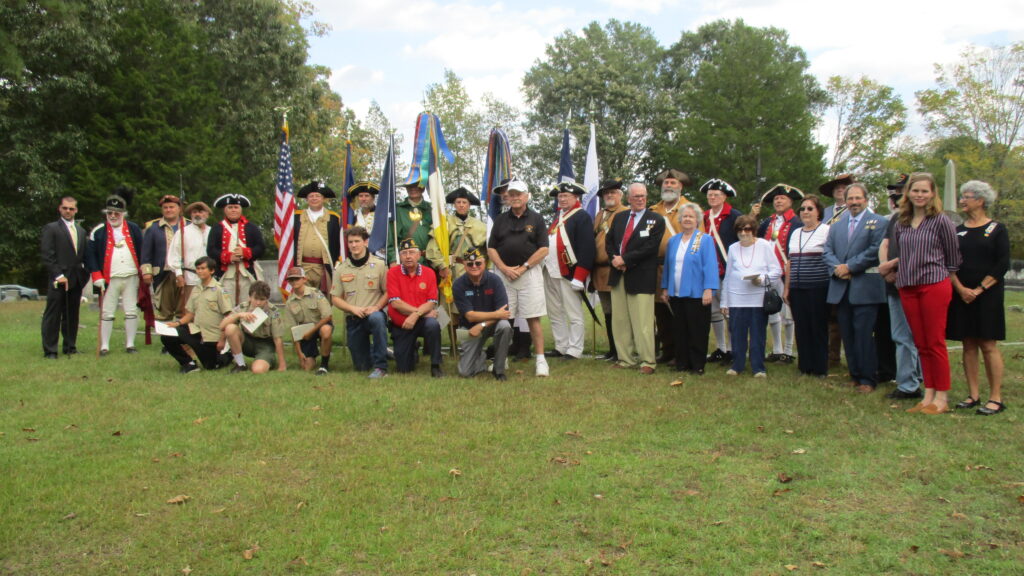