On Saturday, 28 August 2021, in New Bern, a hybrid observance of the 1st North Carolina Provincial Congress was hosted by the New Bern Chapter of the Sons of the American Revolution, and the Richard Dobbs Spaight Chapter, of the Daughters of the American Revolution.  The purpose of the observance was to recognize and honor the bravery of the 71 delegates and mark the importance of the 1st NC Provincial Congress in North Carolina, and American history, especially for its significance toward the outcome of the American Revolution.  A one-hour ceremony, involving over 60 SAR members, was held at the outside Colonial Chapel site at Christ Episcopal Church and included the reading of a City of New Bern Proclamation, by Compatriot and Mayor Dana Outlaw and a keynote address by Compatriot and Dr. Joseph Beatty, Research Supervisor, Historical Research and Publication Office, NC Office of Archives and History.  SAR Society greetings were delivered by North Carolina, Georgia, Florida, Tennessee and Virginia.  Greetings were provided by the DAR-Richard Dobbs Spaight Chapter and the NC Society of the C.A.R.  The ceremony concluded with twenty organizations rendering honors for the 71 Delegates and Resolves of the 1st North Carolina Provincial Congress.

The 248th Anniversary Observance of the New Bern Resolves is being planned for Saturday, 27 August 2022. Information pertaining to this observance can be obtained from the New Bern Chapter NCSSAR web site and by contacting . 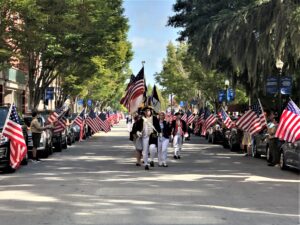