Five members of the New Bern Chapter of the NC Sons of the American Revolution attended the 244th Anniversary of the Battle of Moores Creek Bridge on February 22 in Currie, NC.  Ken McCotter was an Honorary Vice President of the Moores Creek National Battlefield Association representing Craven County…one of the 12 NC counties who sent militia to fight in this battle in 1776.  Participating in Revolutionary War outfits are Bob Ainsley, Jay DeLoach, and Bruce Martin. Ed Perkins took on the role of photographer. 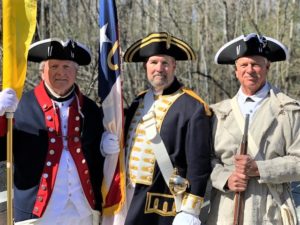