The Halifax Resolves Chapter North Carolina Sons of the American Revolution (NC SAR) conducted a grave marking ceremony for Compatriot James Carlos Harris at the family cemetery at Buxton Place, in the Inez community. Mr. David B. Gammon, President of the Halifax Resolves Chapter (HRC) was the Master of Ceremonies. The Invocation and Benediction were given by HRC Chaplain Rev. Duncan H. Jones. The presentation and retrieval of the Colors was conducted the Combined NC SAR Color Guard under the command of the State Color Guard Commander Ken Wilson.  The pledges were led by HRC Compatriot J. Rives Manning and President Gammon.  The marker dedication was conducted by Mr. Gammon and Rev. Jones.  Wreathes were presented by the following individuals:

The following is a brief biography of Compatriot Harris:

Mr. James C. Harris was born August 30, 1909 in Warren County, the son of Ernest Linwood Harris and Mary Miles “Mamie” Bobbitt. He was educated in the Warren County Schools before continuing his studies at the University of North Carolina at Chapel Hill where he graduated with a degree in Business. While there he was involved in the yearbook and was Captain of the Men’s Cross Country/Field & Track Team.

James joined the North Carolina Sons of the American Revolution and was the youngest charter member of the Harrison-Macon Chapter of the NC SAR. He was 18 when he applied for membership in the SAR in May of 1928.  Compatriot Harris was made an Honorary Member of the Virginia SAR during the Yorktown Celebration in 1931.

Following graduation, he was employed as City Manager for Fuquay Springs, NC, Roxboro, NC and Hazard, KY. At the outbreak of World War II he tried to enlist in the U.S. Army and was rejected due to a slipped disc in his back.  He then tried to enlist in the Merchant Marine and was rejected for the same reason.  Still wanting to serve, he went to work for the Tennessee Valley Authority (TVA).

At the conclusion of the war he returned to Buxton Place (listed on the National Historic Registry) and raised livestock. He married Francis Hall Reams in Warren County on April 6, 1946.  They were blessed with three children; James Carlos, Jr., Ernest Boyd “E.B.” and Francis Ann.

Compatriot James Carlos Harris passed away December 5, 1991 in Franklin County, NC and is buried in the family cemetery at Buxton Place in Warren County, NC. 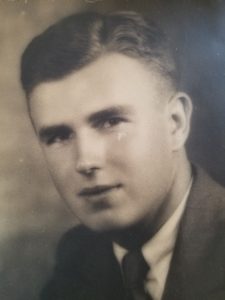