The North Carolina Society convened at the State Color Guard event at Alamance Battle Ground State Historical Park to commemorate the 1781 Revolutionary War Battles of Clapp’s Mill, Pyle’s Defeat and Lindley’s Mill and the pre-Revolutionary Battle of Alamance on 16 May 1771.

Color Guard members from across the state presented the colors along with a local troop of Boy Scouts. 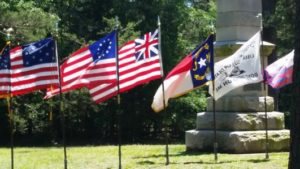 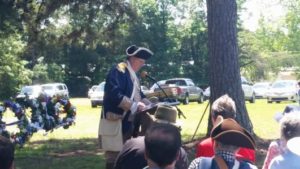 After the battle of Alamance, Royal Gov. Tryon had 12 of the Regulator men tried for treason, with 6 ordered to be hanged, and 6 pardoned.  One of those men, James Pugh, when facing the gallows issued these prophetic words: “Our blood will be as good seed in good ground, that will soon produce one hundred fold.”

Men on both sides of the conflict would later change sides and become leading Patriots, as well as Loyalists, during our struggle for independence.  Some of the Loyalists were earlier Regulators who felt duty bound to keep a required oath of allegiance in order to receive a pardon from Governor Tryon.  Over 6,400 men from the Piedmont and backcountry of NC (2/3 of the free male population there) took such an oath, some under duress as his victorious troops undertook a punitive expedition into western NC.

We are commemorating events in NC, beginning with the Stamp Act resistance of 1765-66 and the Regulator War; building up to to the 250th anniversary of the American Revolution in 2026.

Wreaths were then presented to honor the patriots who fought in the battles by:

On this day in history, May 16, 1771, the Battle of Alamance brings the War of the Regulation to a close when North Carolina “Regulators” are defeated
by Governor William Tryon. The War of the Regulation is often viewed as a pre-cursor to the American Revolution because it pitted regular settlers
against corrupt colonial officials.

The War of the Regulation was the result of a severe drought and the heavy influx of new settlers into the inland parts of North Carolina during the
early 1760s. The population grew quickly, bringing not only farmers, but also businessmen to the county seats. Farmers went into debt during the
drought and the local population became dependent on merchants’ supplies from the east. As debt increased, many fell into trouble and were brought to court by the merchants. A small cabal of merchants, lawyers, judges and sheriffs arose around each county courthouse that took advantage of the
indebted population, often enriching themselves at the people’s expense.

This led to the rising of the “Regulators” who attempted to reign in these corrupt officials, by force if necessary, when reason failed to prevail. The
late 1760s saw many acts of violence against local officials, including an incident when the Regulators interrupted the North Carolina Assembly meeting in Hillsborough. Public buildings, shops and private residences were destroyed and some officials were severely beaten. Much of the population was sympathetic to the Regulators views, but did not support the use of violence.

By 1771, Governor Tryon decided to put an end to the rebellion, gathered a thousand trained militia soldiers and marched into Regulator territory,
arriving near Great Alamance Creek on May 14. The Regulators also raised 2,000 men, but they had no military training or official leadership
structure and had little ammunition. Instead of fighting, they hoped to intimidate Tryon with their greater numbers. Tryon, however, was not
intimidated and, on May 16, offered pardon for anyone who would leave and pledge his oath to the Crown, while requiring that the key leaders of the
Regulation be turned over for prosecution.

The Regulators refused, but asked for an exchange of prisoners who were captured the previous day. Tryon agreed but moved his army closer, to within 30 yards of the Regulators, who sensed they were about to be fired on. At this point, Governor Tryon shot negotiator Robert Thompson dead in a spate of anger. Knowing things were about to unravel, he sent a white flag-bearing messenger to the Regulators, who fired on him in anger for the killing of Mr. Thompson and an all-out battle ensued.

After Tryon’s hat was shot through, he sent a second white flag, but this messenger was also shot, angering Tryon into ordering an all-out pursuit.
The Regulators scattered and fled the battlefield. The victorious Tryon then marched through Regulator territory, requiring the citizens to sign oaths of allegiance to the Crown and destroying the properties of its leaders.

In all, somewhere between 9 and 27 militia were killed and 61 injured. 9 Regulators were killed with dozens and dozens injured. The Battle of
Alamance brought the War of the Regulation to an end. Many of its key leaders were killed or executed after being captured. Others fled to other
states or beyond the Appalachians to make new settlements. The Battle of Alamance and Governor Tryon’s actions were viewed favorably by most
colonists at first, who viewed the Regulators as rabble-rousers. Questions did arise, however, about the methods of taxation and government coercion in North Carolina, which helped feed the rising flames that would ignite into the American Revolution in less than four years.